Written and performed by: David Wahl

Written and performed by: David Wahl

This is a story about the environment…

… an environment shaped by our rubbish, our excrement and our waste.
It’s the tale of our will to survive, our dreams of eternity and our fear of death.
It’s the story of human beings who plan to survive at the expense of their environment, and the rapidly turning vicious circle in which they are trapped.
What is clean?
What is dirty?

Le Sale Discours pursues an investigation into environmental and ecological issues that began with La Visite curieuse et discrète, which examined our relationship to ocean ecosystems. To examine how we relate to waste and its proliferation, I chose to focus on a form that currently plays an especially significant role: radioactive waste. What are we to make of materials which are produced in the name of development, progress and human comfort, but whose harmful effects are measured in decades, centuries or even millennia?
What does this say about the way we relate to the world? What pressures lead us to accept such a risk?
And, more generally, is the challenge of pollution confined to our era, or do the roots of the problem go deeper?
Is waste a metaphysical issue?

We’re in for a strange journey, at any rate, and along the way we’ll cross paths with pigs, atoms, poop, Marie Curie, the Milky Way, ghosts and much more.
What’s certain is that, when dealing with such a topic, we can’t give in to fatalism
or despair.
We have to address these issues with objectivity, and even with humour. Only by doing so do we stand a chance of gaining awareness or, at the very least, sparking dialogue.
David Wahl 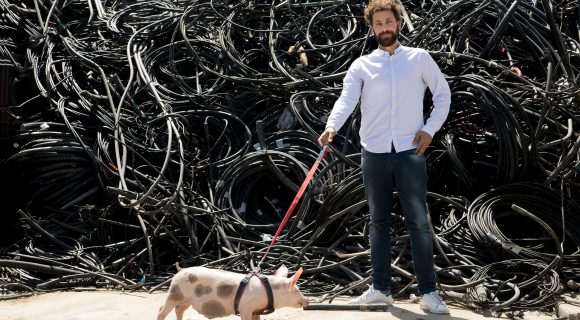 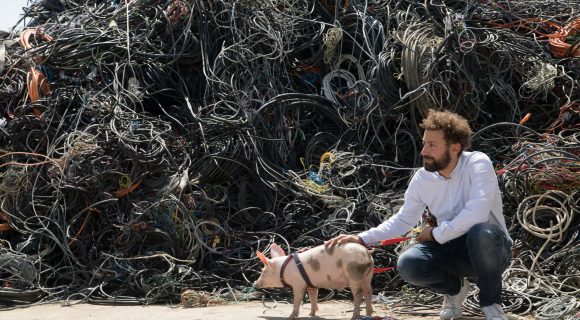 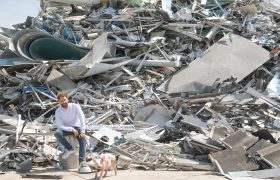 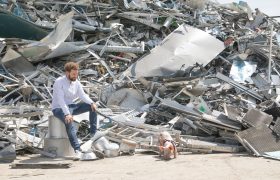 David Wahl was born in 1978. He pursued studies in Latin and history, at the same time attending the Conservatoire d’art dramatique in Paris’ 7e arrondissement. He wrote his first plays while working in a succession of theatres.

Médée, his rewriting of the Medea myth, was performed during Le Petit Odéon’s 2001–2 season, and then at the closing ceremony of Michelle Kokosowski’s Académie Expérimentale des Théâtres. His next work, Le Chant du narcisse (supported by a Fondation Beaumarchais writing grant) was published along with Pampres by Editions Archimbaud in 2004. From 2003 to 2007, Wahl worked at Théâtre du Rond-Point under Director Jean‑Michel Ribes. He collaborated with Jean-Dominique Secondi’s Art Public Contemporain agency on its application to Nice 2013 (European Capital of Culture, Artistic Director Bernard Faivre d’Arcier), directing the design for the exhibit L’esprit du Baroque appliqué à l’art contemporain.

From 2008 on, he focused entirely on playwriting, working as a writer with Julie Bérès (Sous les Visages, 2008; Notre besoin de consolation, 2010; Lendemain de fête, 2013, all for Théâtre de la Ville).

In 2008, Michel Crépu commissioned Wahl to write an article for a Revue des deux mondes issue on monsters. The resulting text, L’Evangile du monstre, reads like a foreshadowing of Causeries.

In 2013, David Wahl began to work full-time on writing and rehearsing Causeries with the support and production of Le Quartz National Theatre in Brest. Before beginning to tour, he created Traité de la boule de cristal (2014), La Visite curieuse et secrète (2014, in partnership with Océanopolis) and Histoire spirituelle de la danse (2015, a Festival DañsFabrik production), all published by Editions Riveneuve/Archimbaud.

His most recent creation, Le Sale Discours (2017), directed by Pierre Guillois and on tour in 2018–19, tells the tale of our relationship to the environment and to our own waste. The text is available from Editions Premier Parallèle.