With Dans ton cœur, the Akoreacro family welcomes talented director Pierre Guillois, writer and performer of the irresistible burlesque melodrama Bigre. For this production, the master of mockery has invented a language that marries text and acrobatics, creating an interdisciplinary dialogue. Ordinary events in the everyday life of a couple begin to slide out of control, giving rise to mad acrobatics. The couple meet: it’s love at first sight, but once the whirlwind of passion has calmed, routine sets in and the bickering begins. So it goes! The artists of Akoreacro interweave everyday gestures with astounding acrobatics, transforming the most insignificant movements into ever more fantastic feats. Even the appliances get in on the action: fridges rock around, washing machines light up and microwaves ring out while bodies fly gracefully through the air of this acrobatic and musical hullabaloo. A zany and tender look at our everyday idiosyncrasies!

Since it was founded, Akoreacro has promoted innovative, popular and acrobatic circus arts. This group of artists, madcap innovators, dreamers and virtuoso performers strives to exceed its own limits and reaches for the impossible.

Physical ability is the cornerstone of Akoreacro’s artistic explorations, which are grounded in a unique and skilful blend of acrobatics and music.

In this welcoming circus environment, the big top is an artistic tool in its own right, bringing people together in a space that fosters creativity.

Every member of the company brings their skills and desires to the table, creating a happy confusion governed by humour, love, and human relations. Akoreacro tours Europe in constant pursuit of new challenges and new audiences.

Welcome one and all to the big top: come on in and take a seat. Around the ring, time stands still, and a whirlwind of sensations sweeps you away on an unforgettable journey! 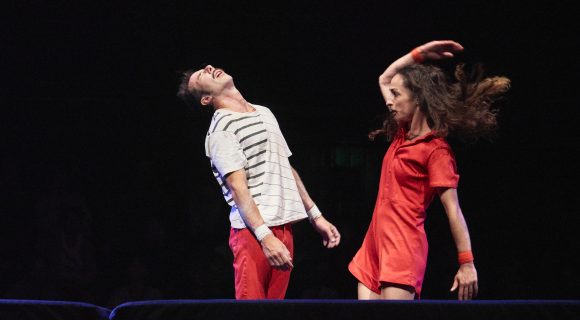 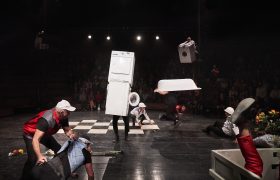 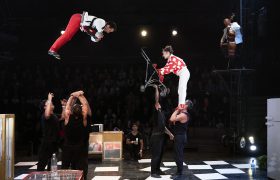