Four human beings, a robot and a chicken are on their way to become the first settlers on Mars. Their ship is gaining distance from the Earth and entering the depths of space. Little by little, crew members shake off the laws that govern their lives on Earth, begin to defy orders, and sail forth towards the red planet in an unexpectedly joyous atmosphere. On this little ship, a new world is already being born.

Making a musical is like a dream; exploring outer space is another sort of dream. Bringing these two dreams together verges on fantasy. Space holds the promise of escape for humanity, but it also reflects an emptiness fatal to mankind. Through the giant porthole, the astronauts study this eternally dark night with its sprinkling of stars. Singing comes naturally to these humans lost in thought far from their home planet. An unlikely orchestra accompanies the questioning of these beings who feel less and less like Earthlings but more than ever Human, caught in the sudden grip of an existential hyper-awareness. Swept along on this celestial voyage, the crew is overcome by euphoria as philosophical fable intertwines with cosmic musical. So begins a truly far-out story that blends the sublime with the trivial. 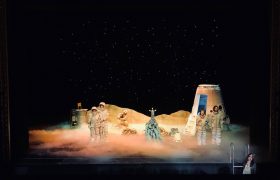 2O36. After many tragic attempts, a private company successfully launches the first human voyage to conquer Mars. The return journey is not planned. The crew will be in charge of colonizing the Red Planet. Tons of equipment is waiting for them up there.

Three astronauts have been handpicked from among the world’s top engineers, doctors and biologists. One African-American, one Russian, one Chinese…

1 French robot is also on board.

1 old man is also part of the crew. This octogenarian Brazilian is not an astronaut, but he is the one who financed this expedition in which nobody believed in anymore. On Earth, he was the richest man of all time.

In 6 months, the spacecraft will travel more than 60 million kilometers to reach Mars. Soon the old man, bossy and temperamental, was hated by the crew. Clumsy on top of that, the one who was the most powerful man in the world is a ball and chain on board. The climate really degenerates the day it damages the machine that kept hundreds of eggs destined to hatch on Mars.

On the 120th day of the voyage, a meteorite fragment, which the spacecraft was unable to avoid, hits an oxygen tank. 1/3 of the vital air is dispersed into the vacuum. In order not to die before reaching Mars, the crew has no choice but to sleep, sleep to the maximum, the only way to use less oxygen.

But dreams will invade sleeping brains and soon become nightmares. The astronauts then expend even more air than if they were awake. …and the entire crew is at risk of losing their lives. It’s the old man who will find the solution so that everyone can reach Mars.